The quest for the technology revolution has brought up the emergence of immersive technology.

This article is a must for you to read if you have been eager to get a best-fit answer to the questions below;

While we have seen one or two technologies that enable immersive experience, there has been a shortcoming that this technology possesses; which has brought up a need for innovation.

The innovation is what makes immersive technology to be in three different stages and still thriving; which are virtual reality, augmented reality, and mixed reality.

In this article, you will get more insight into the concept of mixed reality. But then, before we dive into the topic of this article which is “what is mixed reality”; it’s essential to know about the prior technology innovations, which are virtual and augmented reality.

What Is Virtual Reality 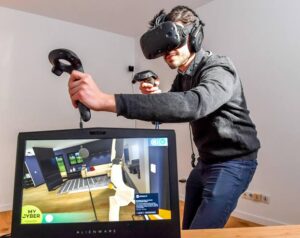 Virtual reality is an immersive experience that comprises a computer-generated environment to make people be catapulted into a virtual world using a sensory simulator to feel a part of the virtual world.

Read also: WHAT IS METAVERSE : UNDERSTANDING THE CONCEPT OF A VIRTUAL WORLD

It completely makes you feel out of the physical world with the aid of a headset, which is popularly known as Head Mounted Device.

The headset automatically makes you feel in the virtual world with an avatar representing you in the computer-generated environment.

What Is Augmented Reality 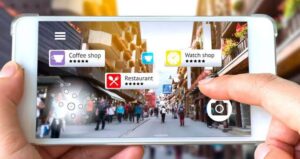 Augmented reality is a reality that forms an environment that contains both real-world objects and virtual objects. It lays over virtual objects onto the real world to expand the user experience.

Augmented reality is experienced with display devices; which may be transparent display glasses, monitor+camera combination, or a head-mounted display.

Unlike virtual reality, augmented reality doesn’t create an immersive experience as it only combines the real world with computer-generated objects which are displayed as it was laid over the surface of the real world using the aforementioned display devices, to enhance users view and provide users with more information of the real-world environment.

Google map is a good example of augmented reality as it enhances locations view by representing real-world locations with a virtual own to show users where they are and where to walk next to.

Related: What Is VR Motion Sickness? : Prevention and Treatment methods

What Is Mixed Reality Mixed reality is a new advanced immersive technology that merges the real world with the virtual world to create an immersive experience without feeling out of the real world.

It’s an innovative technology because it combines virtual reality and augmented reality, it enables users to interact with real-world objects while being immersed in the virtual world.

Mixed reality technology includes augmented reality and augmented virtually which bring up computer-generated graphical objects that are visually mixed into the real environment in real-time.

Augmented reality shortcoming is that, it didn’t create an immersive experience as it only enhances the real world by representing it with virtual objects to improve the view and information of the real-world object as it is overlaid with display devices. Users cannot freely interact with the computer-generated object as it is only required to give users a more enhanced experience.

Mixed reality has come to solve the shortcoming by emerging both the virtual world and the real-world as it was previously explained, the key features of Mixed reality are listed and explained below:

Connection Of Virtual And Real World

As previously explained, mixed reality enable the virtual world to be connected to the real world in real-time with the aid of augmented reality and augmented virtually.

One of the key features of mixed reality is gesture recognition to enhance the interactive experience; since virtual objects are being ported into physical ones, it allows users to operate with the physical object which is fastened by its virtual element.

Mixed reality enables hands to be the vastly useful tools that are hard for manipulating the physical object while being immersed in the virtual world. It proffers a chance to act with a variety of gestures to modify their semantics to certain commands.

Mixed reality has a gesture-based interfaces feature that enables users to interact with objects without any limitation. This gesture recognition is conducted by a digital system that feels users’ handshapes and reacts to them.

The equipment like Microsoft HoloLens has a motion recognition that employs an infrared midst camera which discerns the reflection of the user’s hands.

One of the key features of mixed reality is gesture recognition to enhance the interactive experience; since virtual objects are being very pirated into physical ones, it allows users to operate with the physical object which is fastened by its virtual element.

The computer-generated object in mixed reality is all in the form of three-dimensional, which is created to form a new visualization of physical objects.

Mixed reality is an innovation of overall immersive technology, but it’s still in its infancy stage as it’s yet to go mainstream.

Virtual reality has garnered widely adoption; hence, it has gained traction, and it’s being utilized in most sectors and industries lately

However, mixed reality is an immersive technology that shouldn’t be neglected as it will innovate a variety of industries and sectors if utilized.

What Is Gala Games?

Augmented reality (AR) and virtual reality (VR) combined have helped us visualize how we can use digital technologies to develop...

Virtual reality is an alien concept to most people, as it's a new technology and has yet to go mainstream....

You might be familiar with the use of virtual reality (VR) in the gaming industry. However, it's important to know...

Promising innovations that will improve the way we live and interact with the internet and our environment are on the...

How To Get Free Land In The Metaverse

Since 2020, the metaverse has seen an increase in popularity with the emergence of metaverse concepts such as virtual reality...