In the technology world, virtual reality is at the center of efforts to make an immersive experience possible in the next few years.

However, at the center of this quest for an immersive experience, the limitations of virtual reality need to be considered before diving into a virtual world.

Despite not going mainstream yet, virtual reality technologies are already being used in the gaming, architecture, education, digital marketing, healthcare, and tourism industries, etc.

In this article, we cover the limitations of virtual reality in detail.

Unlike augmented reality that you can access through your phone, using virtual reality requires VR technologies such as VR headsets and VR treadmills (Omnidirectional locomotion devices), which are currently expensive.

The best VR headsets currently available on the market are extremely expensive; they cost anywhere from $400 to as much as $2,000.

VR treadmills are even more expensive. To get a VR Omnidirectional treadmill, you have to spend at least $2,000.

This means that until VR companies can figure out how to bring down the price of VR technologies, virtual reality is currently out of reach for the average person.

2. Lack of awareness of your physical environment

A lot of experts have put people under the illusion that a VR headset is all they need to enjoy an immersive virtual experience. This isn’t true.

The loss of visual and auditory connection to your physical environment while using VR headsets is one of the most worrisome limitations of virtual reality.

When you put on a VR headset, you leave your physical surroundings for a completely virtual experience.

However, you run the risk of running into a table, colliding with a chair, and hitting your head against the wall.

All of these accidents can cause serious damage to your body.

To tackle this, companies are producing VR treadmills designed to help users cover a large distance without actually moving more than a meter in reality. Even so, the price of these treadmills is on the high side.

As with most internet technologies, privacy and personal information security are major concerns with VR.

These can be used by companies to access behavioral information and biometric data such as retinal scans and fingerprints.

Hacking is also another privacy and security challenge with VR. Hackers can manipulate the systems using fake identities and deceive users into giving away their personal information or blackmail and extort their victims.

Experts warn that VR can create a disconnection from the physical world and an obsessive attachment to the virtual world.

Addiction to video games and social media is already common among teenagers and young adults but with VR offering an even more immersive experience a lot of users could be addicted to VR games and other entertainment avenues.

Motion sickness happens when your brain can’t make sense of the signals sent from your sensory organs, such as ears, eyes, muscles, and other parts of your body.

This health challenge is caused by devices such as VR Omnidirectional treadmills and cybershoes, which were created to aid locomotion in virtual reality.

Users remain static while performing lots of movement with their eyes registering all the information or by moving their feet on the spot with the aid of VR treadmills or cybershoes.

These movements can lead to a user suddenly feeling dizzy, nauseous, or sweating profusely at random times. 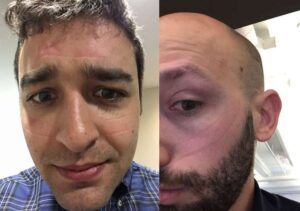 Physical injury is another health risk for some users who use VR devices.

In 2021, there were reports of a 31-year-old German who broke his neck while playing a VR game.

Movements while using VR can reportedly cause muscle strain and discomfort.

While heavy VR head-mounted devices can increase the burden on the cervical spine, 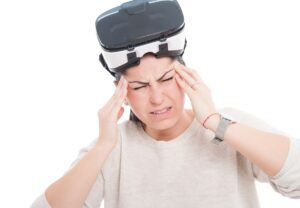 The risk to a user’s eyes is one of the major limitations of virtual reality. Although there is currently no evidence that using VR devices can cause permanent damage to your eyes,

However, research shows that VR head-mounted displays can cause eye strain, blurry vision, and eye discomfort.

Staring at smartphones for a long time alone can have adverse effects on your eyes. How much more VR devices that are held closer to your eyes?

8. Not Energy-efficient (Requires a lot of computational power)

The amount of electricity required to run VR technologies is one of the major limitations of virtual reality that has raised concerns.

VR technologies require a lot of computational power to operate, as the concept relies heavily on using computer simulations to create artificial environments.

These 3D artificial environments need to be rendered in real-time, which means that you’re literally rendering the 3D virtual world at high resolutions and using maybe 5 more energy than required.

Since they are often connected to smartphones and computers using WiFi and Bluetooth, VR head-mounted displays expose users to electromagnetic radiation and focused UV light, which can pose long-term health risks to users.

Addiction to VR games and other immersive experiences in virtual reality can lead to a disconnection from human society.

With video games, social media platforms, and video sharing platforms, there are already high numbers of people who live most of their lives surfing the internet.

An immersive virtual experience will only worsen the situation.

Should you avoid virtual reality technologies?

What is important is to make sure there is moderation and not overuse VR devices.

Every technology has its own disadvantages and another thing they have in common is addiction can pose risks to the user.

Pros and Cons of Augmented Reality In Education

How to Fix ” Pancake Router: Insufficient Output Amount” on Pancakeswap

Augmented reality (AR) and virtual reality (VR) combined have helped us visualize how we can use digital technologies to develop...

Virtual reality is an alien concept to most people, as it's a new technology and has yet to go mainstream....

You might be familiar with the use of virtual reality (VR) in the gaming industry. However, it's important to know...

Promising innovations that will improve the way we live and interact with the internet and our environment are on the...

Dubbed as the next internet, the metaverse is the latest trending technological concept, all thanks to Facebook's name change to...

The quest for the technology revolution has brought up the emergence of immersive technology. This article is a must for...

How to Fix " Pancake Router: Insufficient Output Amount" on Pancakeswap